After all speculations process of updating Moto G phones has began. Motorola today announced about the Lollipop 5.0.2 updates via their official twitter account.

Previously Motorola were rolling out some soak test to check its features and that made some confusion in the users' mind. But now as we can see, Motorola now has stated it officially on their Twitter account.
Read More : Sweetest Android is now available on Moto G

As per the tweet, Lollipop is now currently rolling out as OTA and is for now only available for customers from USA and India. Others will have to wait till the final confirmation comes out. 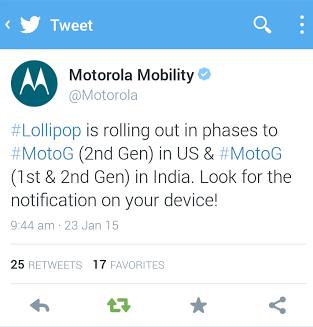 This new update is given to 2nd Gen Moto G in USA and in India it is made available to both 1st Gen & 2nd Gen phones.It means that 1st Gen Moto G users from USA will have to wait for a while and also other country users. No one knows why they choose to go with this strategy, except Motorola officials.

But from previous experience, we can say that update for  1st Gen Moto G users and rest of the world will get the update very soon. It might take a week at the most, but not more than that, so chill !!!