The Coolest MMORPG on the Web!

Since early 2010 (somewhere around March), I had the privilege of being a beta-tester for LEGO Universe. Not one of those people who's the very first person to try out the game, but I was still a tester very early on. I must say, watching the game develop from then, to now, has been a lot of fun. Seeing what I thought the game was going to be, to seeing it now is unreal. The minifigs for this game are insane! I thought you could had cool armor, but not awesome armor! Anyway, as the summer wrapped up and I got busy, I no longer could play the beta. I just didn't have any time, and then in late September, the beta finally closed. I'm not a full blown player, but I've seen some pretty sweet screenshots.

Anyway, in LEGOLAND California (I've been there once!), now has a brand new "Club House" that features LEGO Universe. Inside the club house, there's an awesome mosaic for the four main characters that represent the four different factions. Sentinel, Adventure, Assembly, and Paradox. 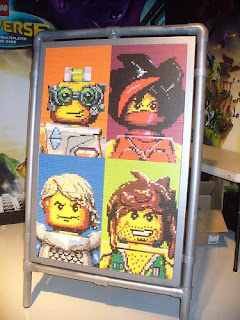 Check out more about the Clubhouse in Legoland here: LINK. And you can watch the brand new trailer for Lego Universe here: LINK