Au_Riverhorse is a somewhat little known AFOL with some very awesome mosaics! He's been previously blogged here on MB, for his cool green army man mosaic. For my fourth interview I was able to talk to him about himself, his mosaics, and his experience at Brickworld 2010.

"Hi, I'm Albert. Yep. Oh, and Canadian, Greater Toronto Area. The interesting parts of the 'who am I' question are really in my other answers."

How long have you been in to/playing with Lego? Have you ever had a dark age? 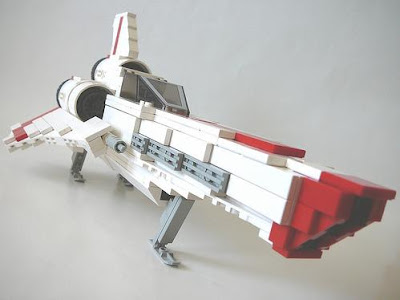 "I have happy memories of shuffling DUPLO boats and trains, my dad assembling an airport set with me around my third birthday, so I guess it's been a while! The blocks were put aside during high school, roughly corresponding to the end of the Royal Knights line, the introduction of Starcraft, and a move. They found the light of day for a university project, but it wasn't until Battlestar Galactica (and after university) that I tried my hand at making something of my own again. So, thank you, BSG."

How and when did you find the online Lego community?

"I had heard about Brickshelf in 2007, but wasn't aware of the existence of LEGO conventions until 2008, when I found out about BrickCon through The Brothers Brick. I browsed their links, went to the convention (air miles!), found Flickr, and have been easing my way in since." 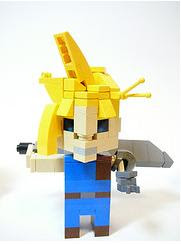 What themes do you like to build in? (if any?)

"I got back into LEGO thinking that I would do a lot of space (because of BSG) or castle (because those were my favourite sets), but it hasn't worked out that way. It looks like I build to purpose, to express an idea, or to try one out. So, you've got a couple of contest entries, an amateurish response to a bathroom renovation headache, and tinkering with CubeDudes. Lately, I'm comfortably bouncing between mosaics and miniland figures, but if I mix the two categories then I would get sculptures..."

Why do you enjoy making mosaics? Has it been something from your childhood, or something that has recently developed?

"Mosaics are relatively new to me. I tried one of Taylor Swift in mid-2009, and after struggling to get a computer-generated template it was really relaxing to just let my mind coast a little and pop in all of the pieces. It being my first mosaic (and Taylor Swift), I also took the time to align all the 'LEGO' etchings on the top of the bricks!

A lack of pieces and the confusion about making templates kept me from exploring this further, but driving out to Brickworld 2010 meant that I could attend two mosaic workshops, and fill my car up with little plastic bricks. After that, it was off to the races!" 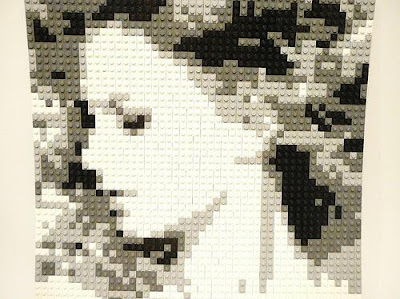 Do you have a favorite mosaic you've made (so far)?

"Besides Taylor Swift? I wouldn't say so, although a few are still up in my LEGO room. What I enjoy is that, so far, there's been something new to discover or try out from doing each mosaic - insights into borders, cramming detail into small spaces, freehand adjustments to initial templates, use of colour..."

In one such mosaic of yours (my favorite), "Bandit", the mosaic is built sideways, which had me scratching my head for quite a while. What's the story behind this mosaic?

"Well, this one started from Brickworld, packing Pick-A-Brick cups with pink 1x1 bricks without a clue as to why. After coming back home, I had about one thousand pink bricks, an itch to make a mosaic, and still no ideas. Mixing 'pink' and 'picture' led to my photogenic friend, who graciously allowed me to use a picture of her playing with a scarf. I also had grays and green, so it was an easy decision to go for grayscale with pink accents." 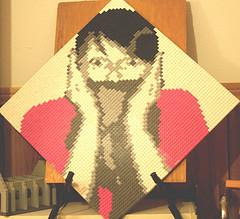 Was it (The Bandit Mosaic) particularly hard to make being sideways?

"There were a number of challenges - the first was cleaning up the original image, then getting a good template. I had tried tilting the image while working on it, but wound up tilting my head too and getting neck cramps. Repeatedly rotating the image kept blurring and moving the colour edges, so eventually I had to restart from earlier saved files and get something that was usable enough to be adjusted freehand. The diamond portrait managed to capture the face, scarf, and hands while keeping the pink and background brick count down, so I guess it worked out!"

On the topic of Brickworld 2010, despite it being three months ago, what was your experience at the convention like?

"Wow, I have to think back a little, now. I remember that it was a huge operation. After registering, it took me half a day of seminars and browsing the main room before realizing that there were more rooms to see! I chose to take in many of the seminars, including the mosaic classes, and the movie theater. Those were probably the more relaxing activities, since focusing on a single topic kept me from getting overwhelmed with everything on display!"

Were there a large presence of mosaics there, or any you found particularly interesting?

"Yeah, mosaics were well represented there, mostly off in one room. Of note: it was fun seeing "The Portrait of Dorian Bley" in person, and the transparent pieces used for "The Great Wave of Kanagawa" gave it a whole other dimension."

Did you attend or help out with any of the mosaic workshops? 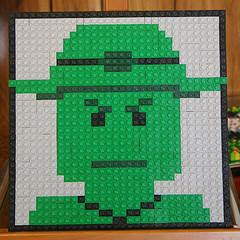 "Actually, since Brickworld is around Father's Day, our family made it a big road trip, and I got my parents signed up for the basic mosaic class. That worked out great, since they got to make something to take back as a souvenir. I picked up their notes and attended the advanced class, where we explored ways of jamming the 1x1 stud area with more detail and color. These two classes gave me the kick I needed to get started with my own stuff, so I'm glad I went!"

Do you plan on going again next year?

"That's the plan, for sure. And since Brickworld 2011 will feature 'the world of light and sound', I've been kicking around ideas on how to incorporate that into a mosaic..."

What does the future hold for au_riverhorse?

"Well, on the mosaics skills side I'd like to explore different techniques - studs up, mixing studs up/out, transparent pieces, layers and relief, color schemes, dithering vs. blocks of color...I'd also like to do more freehand pieces and try to develop a more intuitive feel for how things fit, as inspired by the amazing play (I know it's 'work' and it's work, but it looks so fun!) of Katie Walker. Beyond techniques, I've just finished making a wedding mosaic with a few friends, and I think I like that sort of thing, doing pieces for people. Who knows where that could lead?"

A big thanks to Albert for doing the interview! To check out Albert's creations, view his Flickr stream here
.
Tweet